It is with great honor and respect that the IBS and Wen Wu dedicates this page to those brave Members whose souls have gone before us.

Every Samurai understood that death was part of life and that it could occur at any time. The Samurai’s skill with weapons and his readiness to die when required is what made them such formidable warriors. Much has been written about this willingness to die and their acceptance of their impending death that led to their ability to seize life and live it to its fullest. Below is a somewhat more modern version of that acceptance of a warriors impending death, and because of his “Cowboy” heritage, it is one of Hanshi Reynolds favorite poems.

“Death is that black horse that someday comes into every man’s camp and no matter when that day comes, a brave man should be booted and spurred and ready to ride him out” – Captain Buck O’Neil Troop A, 1st US volunteer Calvary.

Special note: Adding K-9 Riley to the memorial is in no way meant to diminish the honor given to the human members on this page. He was as much a part of our group and dojo as any human.

Henry Soon was an old friend and fellow martial arts student of Hanshi Reynolds, dating back to their studies in the early 1970s. Henry Soon was both an author and unique martial artist. He understood in a depth that few men have. He was tasked in the late 70s to author a book about the martial art that both he and Reynolds were studying at the time. While their Sensei knew and understood the movement of the forms taught, Henry Soon’s book showed that he had a far greater understanding of the system as a whole. For that reason and conversations between Henry and Rick in later years, Rick believes that Henry Soon was the true modern father of that particular martial system and honors him as such.

Henry Soon, like so many other great people in this world, was taken from us way before his time. Henry suffered from a long time ailment that finally took his life in 2005. He will be sorely missed.

Denise Glore was born in Los Alamos, New Mexico and was a long time resident in Albuquerque, New Mexico where she was a practicing attorney, avid animal lover, and outdoorsman. Denise san was a long time student of Sensei Reynolds and until her death, his senior student and member of the Council of Elders.

She too, was taken long before her time. At the time of her death she lived in Idaho where she worked for the Department of Energy and had a small group of martial arts students. She was taken from us in an unexpected and mysterious death.

We celebrate her life and morn her death, but know that she shares a better place with those who have gone before her and since. A deep bow to you Denise san. 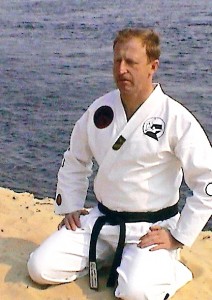 Alexander Kozyrev was a native of Belarus where he served his country honorably in its military and founded the Byelorussian Republican Public Union of Jiu-Jitsu and Self-Defense (BRPU). This martial organization was one of the largest groups of any kind in Belarus with approximately 2000 students nation wide with students in Russia, Germany, and Ukraine as well. Alexander Kozyrev not only trained civilians but members of the military and police and was a respected member of his community.

Alexander Kozyrev discovered Hanshi Reynolds in a video he purchased and eventually tracked him down and became a member of the IBS on Christmas day 2002. He later petitioned Hanshi Reynolds to become his student and 3rd Dan Black Belt on May 26, 2004. He worked his way up to becoming Hanshi Reynolds senior student when he was promoted to 6th Dan on September 4, 2008. He was not only an exceptional student but an exceptional man and friend.

Alexander Kozyrev, like the others before him, left this world long before his time. Without becoming political or making accusations, we will just say that Alexander San died under unusual and un-needed circumstances and without being able to show the world that he was a true Samurai and patriot of his country. It was an unjust and undeserving death.

Alexander Kozyrev will go into history as a teacher, husband, father, and friend. Now he trains in a dojo with other true warriors who have gone before him. He was a stern task master and did not tolerate any students who did not follow the strictest rules and ethics and he lead by example. He was loved by many and missed greatly.

He had the great foresight to leave his martial organization in the hands of his teacher and friend, Hanshi Reynolds.
A deep bow to you Alexander san, OSU!

Riley grew to be an integral part of Reynolds life; he became a constant and loyal companion for the next 15 years. Not only was he the companion of Reynolds san, he became the “Dojo Dog”, present for every work out to see that none but the specified students were allowed inside the dojo.

Just like the other students and friends of Reynolds san, Riley was loyal and protective of his master and all that belonged to him. He became famous throughout the southwest US as the goggle-wearing, motorcycle-riding Harley Dog. Outside martial arts circles, he was better known than his master. It was not uncommon to see him strolling through thousands of bikers at motorcycle rallies, wearing his Harley Jacket and goggles, as tough looking bikers yelled out their welcomes to him while his master went un-noticed.

At age 10, Riley chose his replacement and trained a (then) 6-week-old German Shepherd named Kiki to take over for him when he became too old. Riley led a full and productive life around the dojo and was peacefully laid to rest in January 2010 after he was found to be suffering from bone cancer. He was a true and brave Samurai War Dog, and will always be remembered.